and I saw some balloons rising into the sky, framed by the federal building

then an airplane flew by

a feed, and a bat

1.
I've successfully made an rss feed for this blog, which you can find here. Much perl under the bridge for that...

2.
A bat is attempting to take up residence in our stairwell. Just one bat. We were coming home last night and he flew right out over Laurie's head. Very exciting...

He was there again this morning, but we scared him closing the door. It's probably better if he stays away, since it wouldn't be the most restful of bat caves, though otherwise it's a pretty good environment. Warm and full of bugs. Delicious bugs.

He hasn't come back since this morning, and I'm kinda hoping he's found a better place to live. But if we see him again I'll try to get a picture for the blog. The blog that has a feed!

The promised posts about cat and typewriter are on their way. Until then, friends, adieu.

We found out today that the spongy-barked trees that grow around here are Melaleuca linariifolia, aka flaxleaf paperbark, and are native to Australia. It is a strange tree.

Its fluffy canopy is composed of little lumpy segments, each of which blooms differentially from neighboring segments. The result of this, visually, is that sections of the tree periodically appear to have been replaced by large heads of cauliflower. 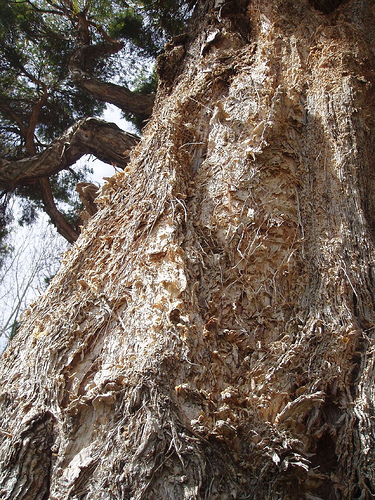 Another interesting aspect of this tree is its bark, which is spongy, as previously suggested. It is similar to the bark of a cork tree, except that the Melaleuca's bark is made of layers of flakes. I think the Encyclopedia of Stanford Trees, Shrubs and Vines puts it best: the flaxleaf paperbark's bark is "composed of sheets of thin 'paper' interleaved with thin sheets of a spongerubbery substance." Some Stanford horticulture student has been reading Joyce. 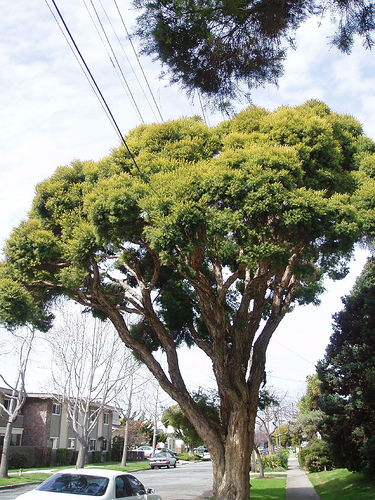 Our street has quite a few of these trees, and they bring us much joy with their spongerubberiness. They are now less of a mystery, but shall continue to be a curious tourist attraction. That must be why we get so many tourists. And blog readers. Right guys?

a walk around the neighborhood

I took a nice walk today and thoght I could start things off here by posting pictures of said walk. I live in a normally old neighborhood (but a goodun) in El Cerrito, CA. It's an old trolley car suburb from the earlier part of the 20th century, apparently. For those who enjoy the histories of amusing little towns, there's a little collection of El Cerrito history narratives here. 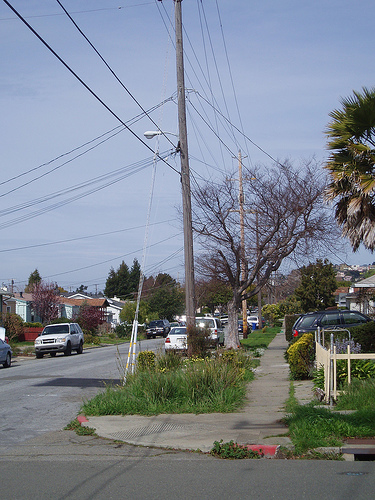 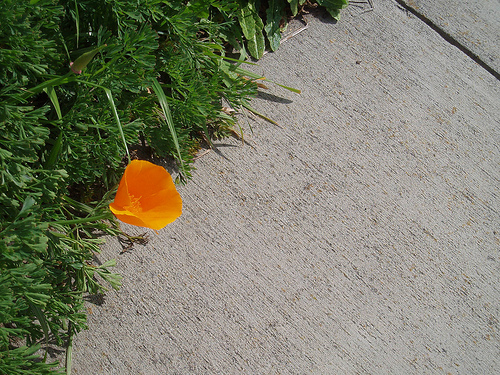 The California poppies are beginning to bloom here, which is always nice to see. 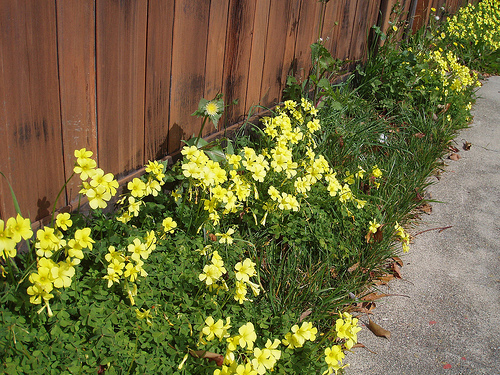 And a phenomenon I've never seen so much of before -- oxalis everywhere! They're in practically every garden. Nice purdy little flowers. 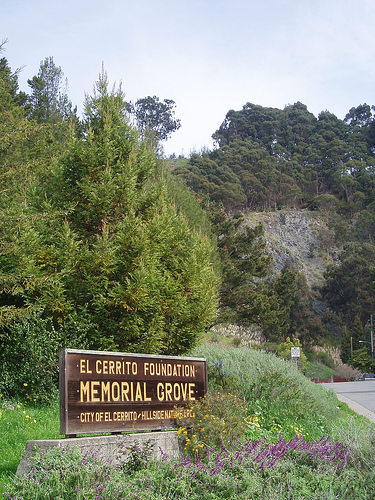 And now we come to Hillside Natural Area. It's a fairly extensive tract of land -- 80 acres of eucalyptus groves and oak groves, interspersed with open grassy areas. It's all rather steep, which makes for good exercise and excellent views. 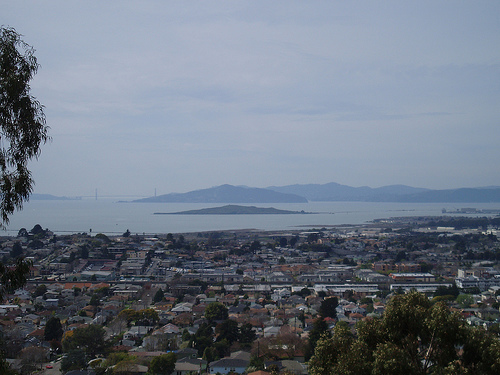 There's the Golden Gate, for instance. We live in the residential bit in the foreground. You can see our place if you know what you're looking for. 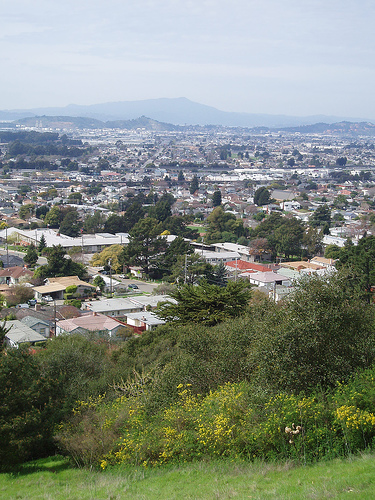 And there's Mt. Tamalpais, with Richmond in the foreground. Notice also the fuzzy thistle thing on the bottom right. 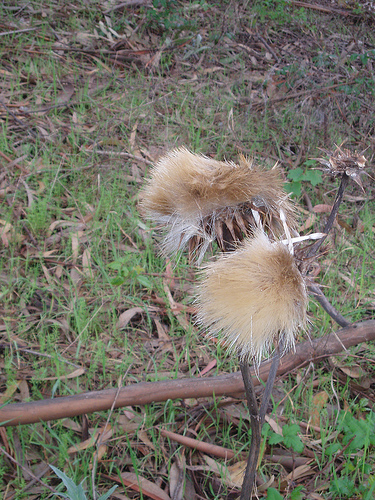 Here's a closeup of another one. Those blooms are fist-sized! Very impressive. 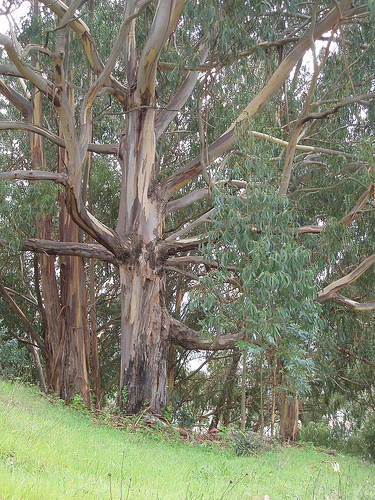 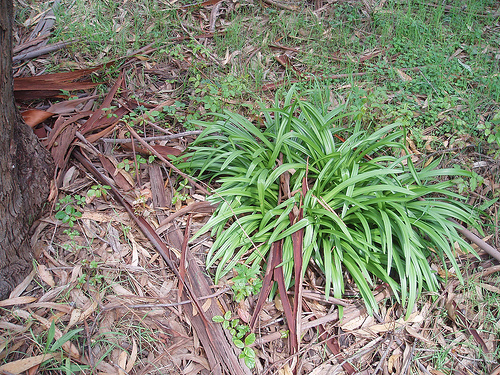 Well we've descended into madness here, and it's just about time to wrap things up. 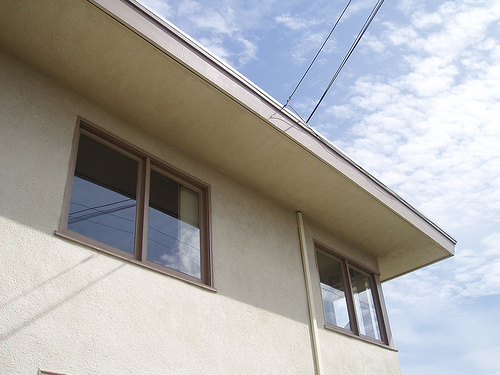 So there's the end of my walk -- home sweet home.

Soon perhaps I'll post about the various goings-on inside this home of ours, perhaps including a chronicle of the restoration of my very own Remington Model 1 typewriter. Or perhaps a character study of my strange and loud cat. So many bloggy possibilities! I know you can't wait.

The ravens and the astronauts
Will meet someday in space
And then
We'll know who's boss.